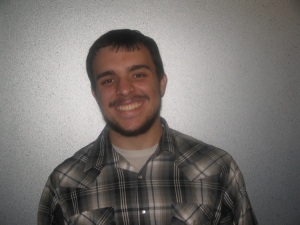 This week’s FSI Highlight takes a look at another one of our behind the scenes employees who is responsible for making sure everything on the front end runs smoothly. Alex Alksnis has been an employee of the company for eight years but he’s been around the company since he was a kid as his father worked here as well.

Alex recounted one of his first memories of FSI from when he was only 10 years old helping out his dad.

“…I made copies of catalog pages for a big meeting all night long to put into binders. I think I worked a 12 hour day for about 15 bucks. Talk about a solid if I knew then what I know now!”

When he first started with FSI, Alex worked mornings in receiving while taking classes in the afternoon. Since then he has served in many different roles. Currently Alex is the Raleigh and Wilmington Operations Manager Trainer. Alex’s role in operations is constantly evolving as various needs and situations arise.

“We have two rookie OMs (Operations Managers) at both of those branches and I’m spending the year in Wilmington working at both branches getting them ready to take full control. After that…I’ll figure it out when I get there.”

Alex’s day to day work varies based on what the needs happen to be. Some days he’s helping with furniture installs, other days he’ll drive a route at one of these two branches. But generally, he oversees the drivers, installers and OMs at his branches making sure our customers get the products they need when they need them.

Alex says his favorite part of the job is the independence he’s given and the ability to create his own opportunities here.

Though it’s been a while since he took a real vacation, Alex says he would like to visit Japan at some point.

He’s also a big fan of Indian food. “(Mark) Dwyer and I actually had IFF (Indian Food Fridays) when I was in town, and every time I come back we make it a point to hit the joint up the road off Old Concord.”

My odd ball question for Alex was what time period would you travel to if you could?

He responded, “The total nerd in me says medieval times because you know…swords, damsels, horses. But the whole bubonic plague thing probably sucked. So I’d go with the Roaring 20s. Just a good happy, positive, light hearted atmosphere.” Don’t you just love the answers to these questions?
Now for a few parting words from Alex. “Get really good at the stuff no one else wants to do. Nine times out of 10, you’ll be the most valuable person in the room.” And for some words to live by, “Luck is the creation of dedication and a well executed plan.”

Some great thoughts for all of us.