Coffee has come a looooooooong way since its introduction around the thirteenth century. There aren’t many people who drink a regular cup of Joe anymore. Even the ordering process seems like a foreign language, ‘Can I get a latte macchiato grande with soy milk & a double shot of espresso please?’ Shew, it’s like I almost need a coffee to help me even order a coffee. HA!

Are these types of drinks coming to the office? You bet ya!  Move over straight black, it’s time for steamed milk and meringue-like foam with smiley faces floating on top. I have to admit that the smiley faces do make drinking coffee more fun and exciting. Maybe that’s why corporate break-rooms are being equipped with just more than a simple brewer and a large coffee pot. Wishful thinking, I know.

Not only has coffee itself become soooo deliciously complicated, but so has the topping bar. It’s beyond two sugars and cream now. I bet coffee drinkers from the thirteenth century would think we were geniuses for putting whip cream, caramel sauce and cinnamon on top of coffee. At least I would think so.

Brewers like the Nestle Professional 510 Brewer have brewed their way onto  counter-tops by serving cafe-style coffee beverages at a simple touch of a button. TOUCH OF A BUTTON!!! Are you serious?! That is AWESOME!! No more waiting in long lines at your local cafe or trying to replicate your favorite drink at the office with ‘fake’ powders. YAY! 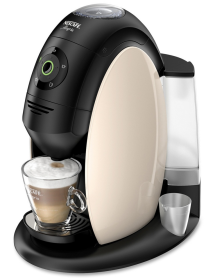 Now the only question left to answer is, ‘How do you want your cafe-style beverage?’